One of the things about both Malaysia and Cambodia that sets my teeth on edge is the mindless development.  My friend Malcolm blogged about it in his neighbourhood, where villas are demolished to build multi-storey apartment buildings on a daily basis. Is there a market for all these upscale apartments?  No. Does that slow the construction frenzy?  No.

Aeon, the Japanese company, opened a 108,000 square metre shopping mall in the Phenomenal Penguin last year. Oh, the fanfare! The first few weeks, it was buzzing. A year later, many of the retailers have closed up and moved out rather than renewing their leases. My friend Barbara went there on a Sunday afternoon not too long ago and said there were plenty of people strolling about, but almost none of them carried bags containing purchases.  In other words, the mall has become a large, air-conditioned walking track.  "Aeon’s existing $205 million mall received close to 15 million visitors in its first year of operation, although officials yesterday declined to reveal sales figures," drily noted a Phnom Penh Post reporter.  Wait a minute, did that say existing mall?  Yes, Aeon has looked the numbers (at least some of them) and decided that the only thing to do is build another, bigger, more expensive mall out near the airport.

Another stunning example of phenomenally pointless property development is the city's tallest (at least for the moment) building, the Vattanac Capital Tower.  Here's a picture from the Guardian, with the elegant, art deco Central Market in the foreground. 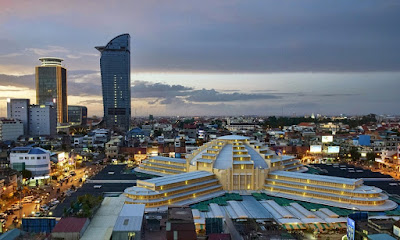 Because of the odd bit jutting out to the left at the foot of the tower, many refer to it as the Boot Building. I've always called it the Angry Bird Tower. Last night, a friend said something about the Shenguin, which I thought must be something wonderfully inscrutable and Chinese. "A cross between a shark and a penguin," she said.  Whatever you call it, however, the building is empty. The Guardian wrote a scathing story on that point, a story that would be funny if it weren't so damned tragic. One excerpt:


"On a recent Saturday morning, the place was deadly quiet. Orchestral music seeped through loudspeakers. Sales assistants pottered about in high-end stores such as Longchamp, Clarins and Hugo Boss. Cleaning staff mopped spotless floors. A maître d’ in black tie waited at a cafe where a box of tea was on sale for $50. In another shop, baby clothes retail for more than $100. The basic wage of an worker in the garment industry, the city’s largest, is $128 a month."

My neighbourhood, Boeng Trabek (literally Guava Lake) has been fairly low-key, which suits me fine. I'm not intrinsically opposed to development, mind you, if it makes sense. Now let's take the case of the Phsaa Boeng Trabek, the local wet market.  It used to be very wet indeed, because it sat on a dirt lot, and all the meat and fish and vegetable trimmings just got ground into the mud, and when the tarps that were tied to poles overhead worked loose in the wind and rain, they collapsed, soaking everyone and everything beneath them.  Last year, the city sent word to the vendors that they had to move across the street and set up their stalls outside the Boeng Trabek Plaza -- a small shopping centre which was moribund from the get-go.  Like Aeon, but on a smaller scale.  But now all the paved area outside the Plaza is filled with market stalls, and because it is paved, it can be hosed down at the end of the market day. Bravo!

So although it makes no sense whatever that this abjectly vacant, white concrete elephant sits in the middle of a thriving wet market, it's better than walking through ankle-deep muck to buy my produce.

Let's take a look at the market area today. You'll still find heaps of trimmings on the pavement; I don't mind so much when they're flower stems. The offal starts to get smelly and slippery by late morning.

If you need a boost to finish your shopping, you can buy a glass of freshly squeezed sugarcane juice.

Need a new or used mobile phone?  These guys even sell the "jailbreak" or unlocking mechanism so you can actually use the iPhone you buy from them. (Please don't ask me how or if that works, or whether the original owner from whom the phone was likely stolen will be able to track it once you start using it... I have no idea.)

Moto and tuktuk drivers try to find a bit of shade around the edges of the market as they wait for business -- these two are likely to be puttering down the street shortly with middle-aged Khmer matrons behind them, their big sacks of groceries in the drivers' laps.

Here is one of the market alleys -- you can see the pavement underfoot and solid roofing overhead. It's still not what a WHO inspector would call sanitary, but it's a vast improvement. It's where I buy all my produce now.

At the end of the day, the vendors whose stalls aren't under the roof lock their umbrellas with thick chains and padlocks, because otherwise they'll disappear during the night.

On the street as you approach the wet market are some stalls selling clothing, hats and shoes. Remember that the garment industry is Cambodia's largest. These stalls might sell factory rejects, discontinued items, or pirated "designer" stuff. It's all of low quality, but at a price that most Cambodians can afford -- $1-2 for a cap, flip-flops for a buck, etc.


One of the less pleasant aspects of the Phsaa Boeng Trabek is the fact that one side of it runs along the street that all the expats know as "Sewer Street".  It's an open canal of turgid liquid that doesn't bear thinking about and which, quite simply, reeks. 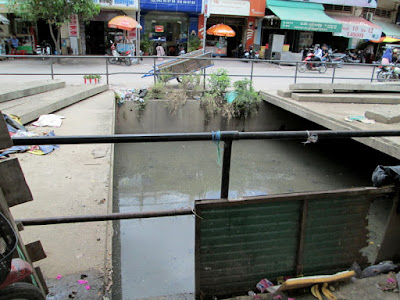 So what, we've all been wondering, are they going to do with that dirt lot across the street from the Boeng Trabek Plaza where the wet market used to be?  The fencing went up a month or so ago; the illustrations went up last week. I haven't stopped fuming since.

I didn't want to snap a photo of this little girl while she was squatting and urinating in the garbage heap, so I waited until she'd finished and was passing the photo of the projected luxury high-rise.

The person who drew this mock-up must live in Texas. All white people, strolling out of top-tier designer boutiques with their purchases, in an open, calm spacious landscape.  Trust me, folks, this scene will never exist in the Phenomenal Penguin. Nor should it.

And this living room -- oh, for the love of interior design!  It seems to be all of one piece with the bedroom, by the looks of it (see the bed and night stand in the foreground), and what fantasy cityscape is that outside the window? With this building plan, there's at least a 25% chance that you'll have an unobscured view of the open sewer.


As I walked back home, I noticed a small, pathetic makeshift shrine that the construction workers had set out. An offering to appease the spirits, probably with the meagre things they can spare -- a bit of old rice, a chicken head and a couple of incense sticks.


So let me say this one more time:  I am not opposed to development. I would wholeheartedly cheer developments that led to most Cambodians having access to adequate health care, decent nutrition, potable water (not widely available outside Phnom Penh) basic education (for all, not just those who can afford to send their kids to private, international schools), and rule of law. I cheer development that actually improves the quality of life in a neighbourhood -- walkways that you can actually walk on, say, or new buildings that are designed on a humane scale, or street lights to reduce crime at night.  Streets without potholes that go halfway to Bolivia. That sort of thing.  Even covering the sewer would be a lovely start, but building a gigantic, luxury condo-mall complex in Phnom Penh really stinks.